Skip to content
Home/Grass Turf News/TifTuf™ Bermuda – Does it Live Up to the Hype?

TifTuf™ Bermuda – Does it Live Up to the Hype?

When this grass first became available for sale in 2015, we had a difficult time believing that it would to live up to all the hype. Maybe in Georgia where it was initially developed and tested, but here in the DFW area with asphalt-melting summer sun coupled with city-imposed water restrictions during some drought years, it was going to have to be tough as nails to fulfill all the promises that had been made.

What were those promises? Significant drought-tolerance and reduced water usage over any Bermuda. Even claiming TifTuf used 38% less water than its well-known cousin, Tifway 419, thereby paying for itself in as little as 1.7 years. It would stay green under stress when other grasses would go dormant turning your neighbors green with envy as their lawns turn brown. TifTuf would stand up to heavy traffic and recover quickly from damage. Plus, it’s earlier to go green in Spring and later to turn brown in the Fall or Winter so you can enjoy its beautiful carpet for longer. The final, and perhaps most difficult to believe, was the promise that it could stand the shade. Something that sun-loving Bermuda grasses just don’t do. 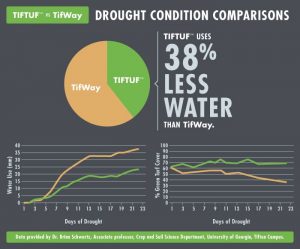 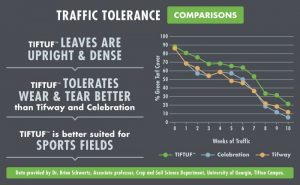 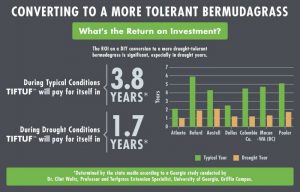 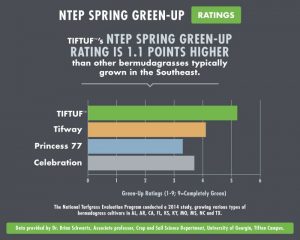 As the color of these lawns has remained strong, our doubts have faded. Apparently, you can have your cake and eat it too. Enjoy it picnic-style on your lush, deep green TifTuf lawn. We’ve become believers, but what’s really going on here? What is making this particular Bermuda hybrid so successful in such varied conditions?

Let’s tackle drought first. Bear with us for a short lesson on three strategies plants employ to deal with drought. The first, called “avoidance”, is to develop a larger, deeper root system that allows them to access moisture that other plants aren’t reaching. Another strategy is to simply “escape” the problem by turning brown and going dormant. Finally, there’s just plain “tolerance” where the plant makes osmotic adjustments involving membrane stability, and if you slept through science class, that just means the plant changes the way in which it uses whatever water is available more efficiently to keep itself alive.
The scientists behind TifTuf wanted to figure this out as well and prove it wasn’t a fluke before bringing this new grass to homes throughout the Southern half of the United States. “New” is a relative term. TifTuf was actually developed in 1992, but only started undergoing rigorous scientific testing in 2009. Years of tests revealed that TifTuf did not have deeper roots, and it actually avoided the “escape” strategy longer than other Bermudas. It truly performed at an exceptional level under stress. Instead, they found that TifTuf slowed the rate at which moisture escaped the soil. This allowed the grass to stay green longer. They also recognized that Texas was a perfect proving ground for this grass and it was planted and tested in Dallas, College Station and Austin before it became available to you. We need not have doubted its performance.

TifTuf‘s ability to hold moisture in the soil is responsible for another of its additional benefits, the ability to stay green longer. It greens up at the first sign of Spring which also helps it outcompete weeds and Winter-kill dead spots are less of an issue than you see with other Bermudas. It also retains its green color when stressed by drought. It’s not perfect under stress, but far greener than other grasses under the same conditions. In the Fall, you typically get a couple extra weeks before dormancy sets in.

Remember that cousin, Tifway 419? He’s been a great choice 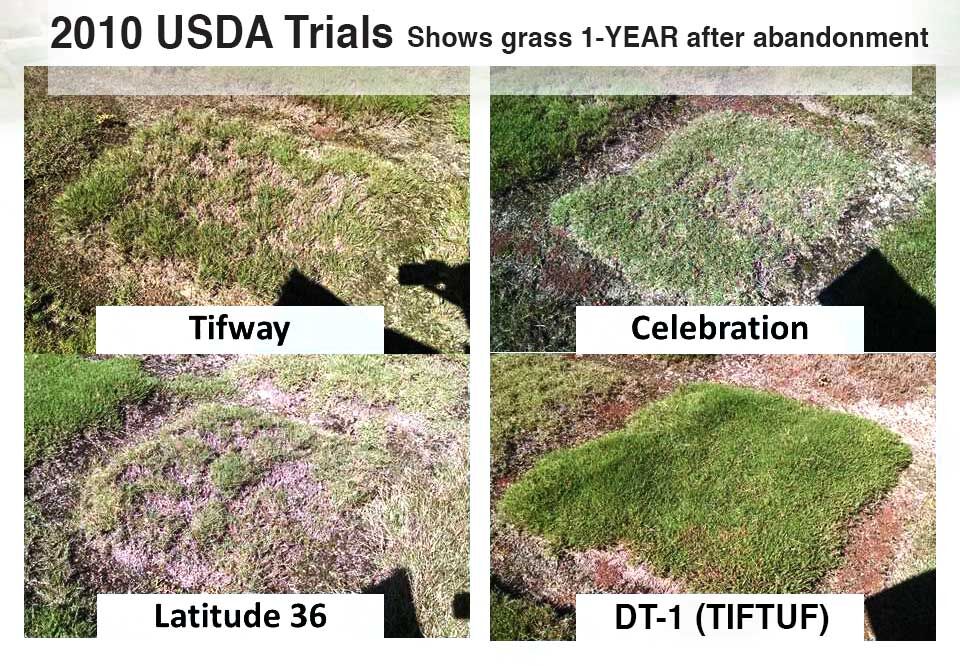 for athletic fields. Would TifTuf hold up as well? A unique machine was used to find out. It simulates the kind of damage caused by cleats on a football field or around soccer goals without having to hire some local high schoolers to come out and play when it’s 102 degrees. The scientific verdict was yes, so you can let your kids and your Great Dane run rampant without fear.

Shade tolerance, is it real? Those scientists shied away from this question when it was asked. This was something that sun-worshipping Bermudas just don’t do. Finally admitting it was a valid question that needed a definitive answer, they decided to forego a strict scientific-method approach. Why waste time and resources on the impossible? Instead, they would just plant it in real world situations with real world homeowners. The results were shocking. TifTuf actively sought out shade and managed to do well with as little at 25% of the light it would experience in full sun. Again, that hold on moisture meant it could live beneath mature trees whose roots normally leave the surrounding area dry.

It’s more than hype. TifTuf Bermuda grass gets an enthusiastic thumbs up from us. If you want to know more or are interested in planting TifTuf in your yard contact us for all the details.